The majority of Finca Tamana is planted with Variedad Colombia and a little bit of Caturra so you might say it is the benchmark coffee from this farm. Both cultivars taste very similar here with pronounced sweet caramel and panela flavours with subtle fruity and herbal notes. This coffee is all about sweetness and smoothness which is the result of only picking and processing the ripest coffee cherries and extreme care taken during processing, drying and the sorting of the coffee. 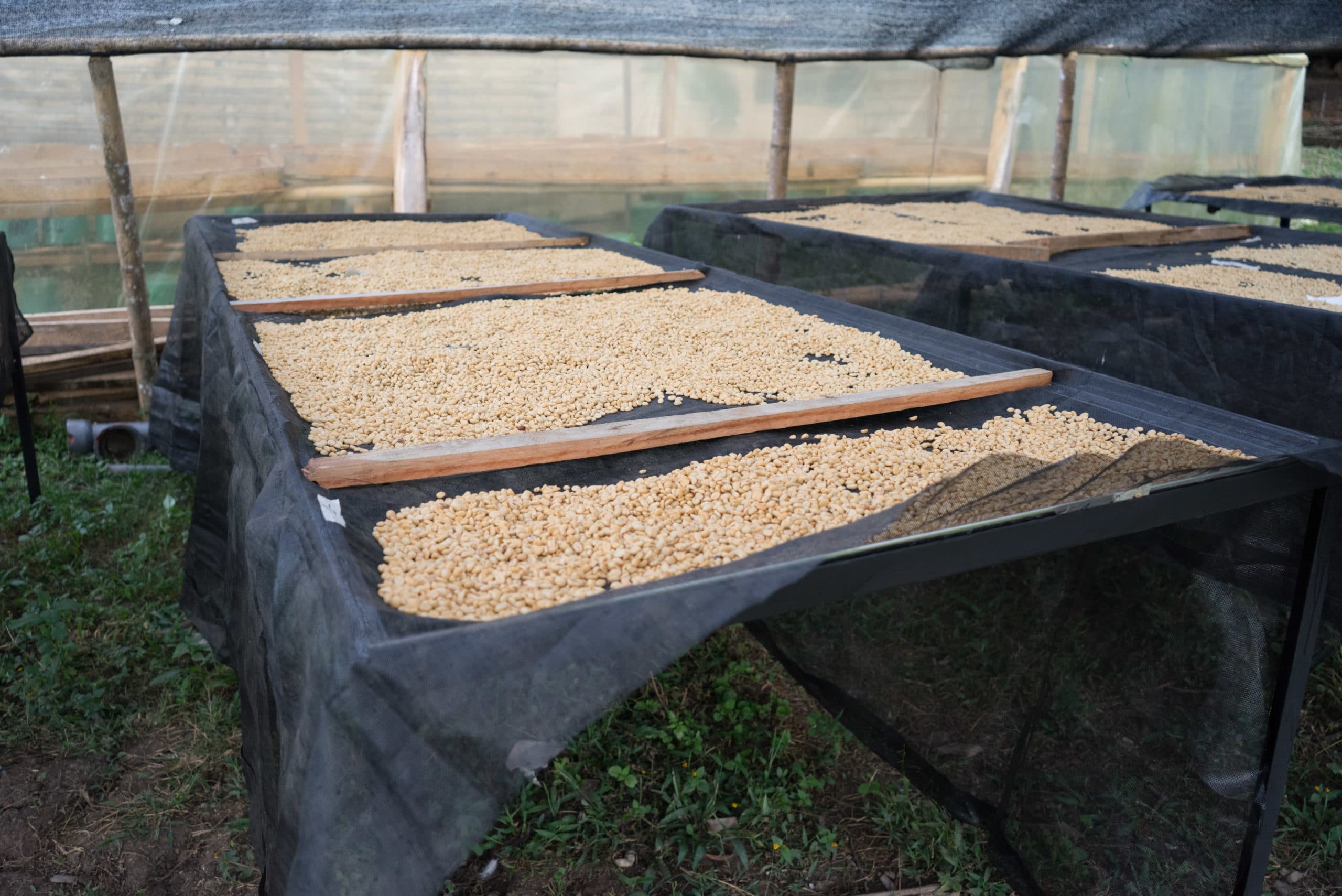 Finca Tamana is a 57 hectare coffee plantation located in the mountains between El Pital and La Plata in Huila Colombia. It was acquired by Elias Roa in 2011 after being abandoned for a while  and today the farm is managed by Elias and his family.

How I met Elias

I first met Elias back in 2007 when I was traveling around Colombia with my friend and coffee exporter mr.Alejandro Renjifo. The aim of the trip was to find delicious coffees and potential farmers that I could work with to make sure we got a steady supply of tasty coffees from Colombia. While passing through the state of Huila I visited a small group of farmers in Acevedo that was lead by Elias. I remember we drank hot chocolate (!) and ate bread and cheese at his house and Elias gave me an impression of being  a passionate and hard working farmer. Later that year I received a few samples from him but unfortunately his coffee was not meeting my quality requirements so nothing really came out of it.

The start of a beautiful friendship

We did meet a few times more on my later visits to Colombia but it was not until 2011 that we started discussing working together. There were a couple of reasons that triggered my interest in cooperating with Elias. He had show interest in meeting me every time I went to Colombia and he had also bought Finca Tamana which happened to be situated next to a farm that I had been purchasing small quantities of coffee from in the past. It meant that I knew there was potential for growing good coffee in the area and since Finca Tamana was much bigger than the average 2 hectare coffee farm in Colombia I knew that there was potential for producing enough quality coffee for our demand.

The biggest challenge was that Elias was out of money, the farm had almost no infrastructure and he had very little experience in how to produce the highest quality coffees . The good thing was that the coffee trees were already planted and full of coffee cherries and Elias had a dream, an open mind and a lot of courage. He willingly agreed to do some small experiments with me so in June 2012 I went back  to stay on his farm for a week in order to see how we could improve the coffee from Finca Tamana together.

It marked the start of a beautiful friendship and partnership.

Although we have done many small and big changes and improvements since I started working with Elias, all of them are based on the same long term plan we made in 2012. We wanted to make Finca Tamana a farm that could consistently produce some of the best coffees in Colombia and reduce its negative environmental impact. In order to achieve that we also needed to make sure it became economically viable for Elias to produce coffee. That is why in the beginning we had to focus on the most crucial steps in order to make the quality better and more consistent in order to raise the value of the coffee.

The first thing we started to work with was separating the coffee by cultivars in order to identify which coffee was tasting the best on the farm. Then we focused on improving picking, processing and the drying of the coffee on the farm. But the simple task of making sure only the ripest coffee cherries get processed together, which is crucial in order to make a sweet and tasty coffee, turned out to be quite challenging. The seasonal coffee pickers seemed reluctant to do it and even when promised a better price per kilo of cherries picked, they were still hesitant to change their ways. It was not until they got their first payment when they saw that they ended up earning more money by doing selective picking and sorting, that the majority endorsed the new system.

Cleaning up the process

We also implemented better cleaning procedures for the  the processing equipment and standardised the processing protocols. Instead of de-pulping the coffee throughout the day,  the coffee got de-pulped at night only and fermentation was checked regularly until the coffee was done fermenting. Then we implemented a better system for removing floating beans (less dense and lower quality) and washing the coffee. We added a soaking step to even out the moisture content in the beans before drying them slowly under shade nets on clean parabolic drying patios. The new protocol meant that Elias had to pay the pickers a lot more, the processing would take another 24 hours and the drying of the coffee would take up to 30 days as opposed to the traditional 6 – 8 days. We also improved how the coffee was stored after drying and looked at how to improve logistics, sorting and packaging in order to extend the shelf life and preserve the quality of the coffee after it was harvested, processed and dried.

These were the major changes that we implemented from the start and that has made Elias’ coffee taste consistent, clean, fresh and sweet every single year since 2012.

Adding a lot of extra days in processing and drying meant that Elias had to invest in infrastructure and expand his production facilities. Since 2012 he has built a new house for him and his family, a new dormitory for the seasonal workers and a new and bigger kitchen where his wife Bellanid cooks three meals per day for his family and all the workers on the farm. Elias started with one parabolic dryer for drying his coffee and today there are dryers all around his farmhouse. A new wet mill built in stainless steel with more capacity and that uses 50 – 80 times less water to process the coffee was installed in 2019. Since 2012 the farm is completely transformed and is set up to produce a lot more quality coffee.

But the infrastructure is not the only thing we have been focusing on. Elias has also gotten better agronomic support to make sure his coffee trees are producing well. He has stopped using herbicides and is now mowing weeds on a regular basis which means the soil will gradually become better because of the accumulation of organic material being broken down to hummus again. We have also encouraged and supported him in planting more shade trees in order to prepare for a hotter climate as we believe that the best coffees are always grown under natural shade from native trees.

Although all of the changes described so far are important for improving the quality of the coffee we have still only seen the beginning of what is to come.  In my experience the biggest influencer on a coffee’s flavour is  the plant itself. That i why we have been planting over 30 new coffee cultivars at Finca Tamana in order to see if there are some that can produce a better cup than the traditional cultivars (Caturra and Variedad Colombia) that were already planted on the farm. So far we have succeeded in establishing a small production of the famous Kenyan SL28 cultivar that has a more pronounced fruity flavour and more recently Elias started harvesting the first cherries from his red and pink Bourbon cultivars which are tasting really good as well. He is also producing different types of Castillo, some Typica and soon we will be able to get some amazing new flavours from trees that are just about to start producing. Developing a production of a new and tasty cultivar can take from 5 to 10 years and there are no guarantees that we will succeed. Still what I have tasted from some of these new plants are  very promising and I personally believe that Tamana will be producing some spectacular and  rare coffees in the near future.

I hope you will enjoy the coffee 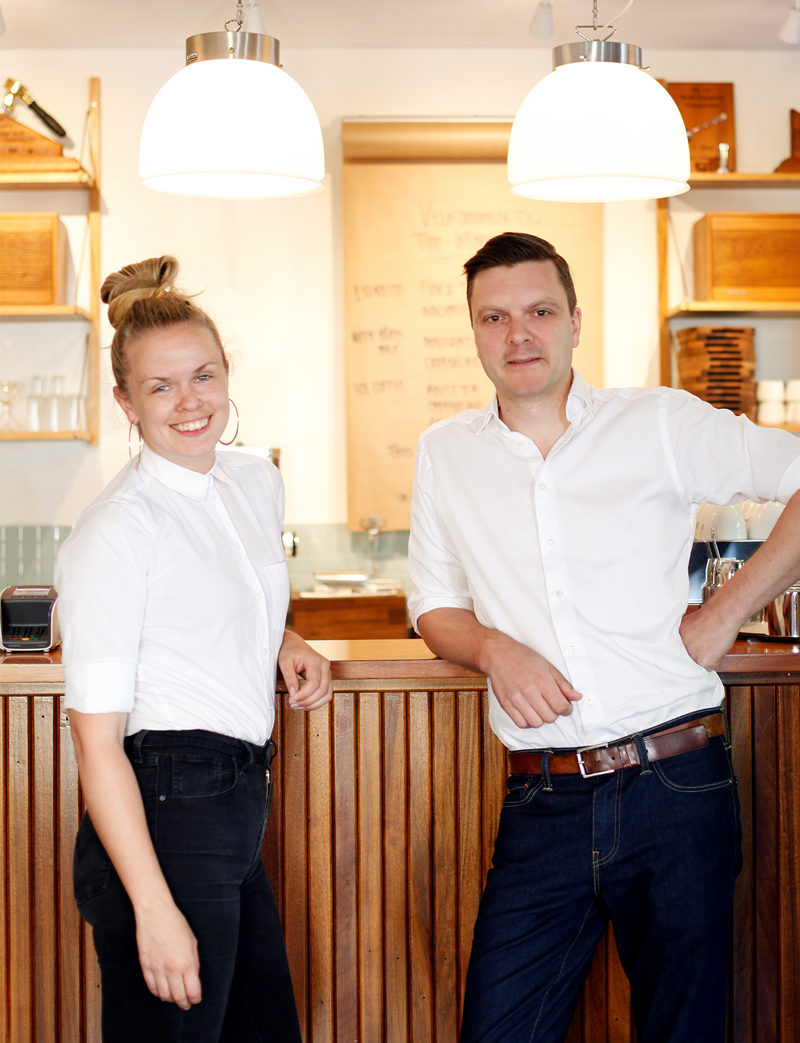 Hello and thank you for visiting our webshop. We hope you find what you are looking for, whether it is a selection of fresh, bright and delicious-tasting coffee to our coffee subscription service, wholesale portal, brew guides, equipment and other useful information. If there is anything else you need, please don’t hesitate to get in touch via our contact page. We’re happy to serve you.

Ig. Fb. Yt.
X
We use cookies to ensure that we give you the best experience on our website. If you continue to use this site we will assume that you are happy with it.Ok