Marysabel Caballero is 3rd generation coffee farmer and together with her husband Moises Herrera they now own over 150 hectares of land planted with coffee near the town Marcala, Honduras. Marysabel’s father don Fabio Caballero is by many regarded as one of the pioneers among high quality coffee producers in Honduras. Together the family run a big wet mill where all of their coffees are processed and dried.

Both Fabio, Moises and Marysabel have consistently been producing some of the best coffees Honduras has to offer. For over a decade they have been winning many top places in the Honduras Cup of Excellence. In 2016 and 2018 they managed to win 1st place with their Geisha coffees, but their first recognition was in the first Cup of Excellence competition in Honduras in 2004 when they won 2nd to 5th place with their Catuaí coffees.

View coffees from their farm 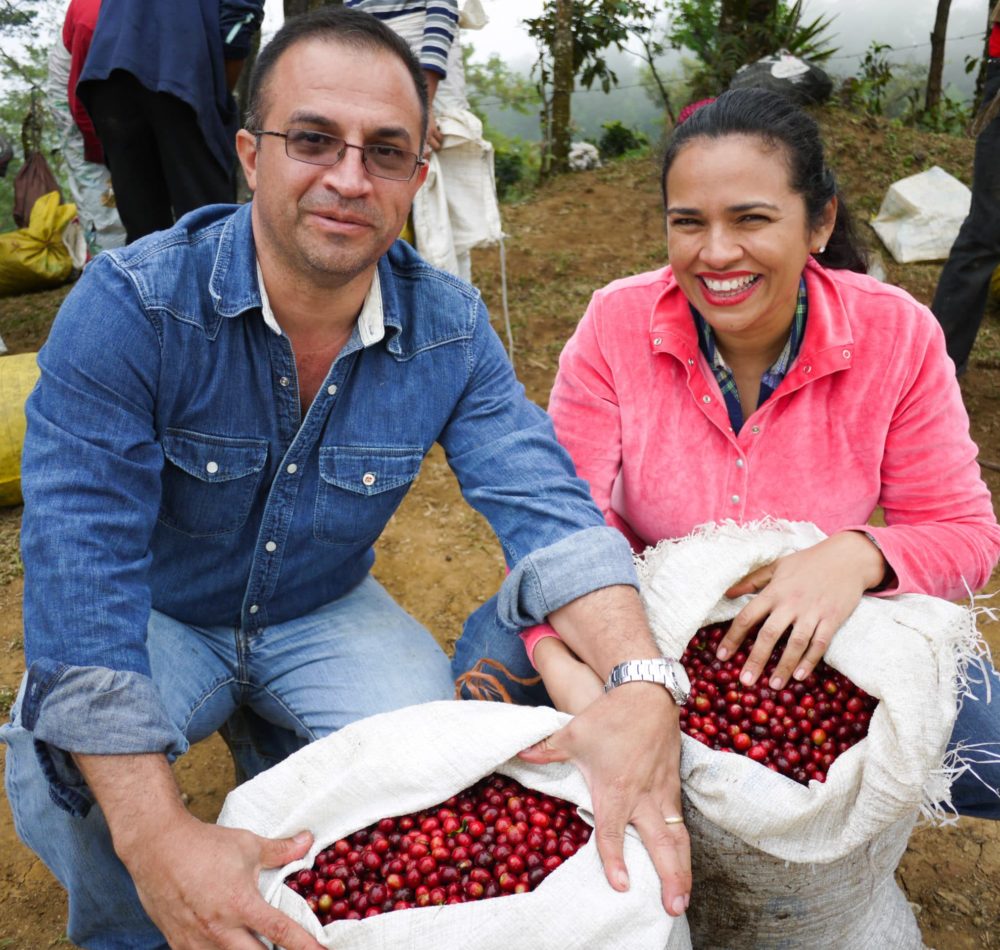 How I met the Caballeros

My first memory of meeting the Caballeros was at an espresso expo in Trieste in Italy in 2004. I stopped by the Honduran coffee booth where they had set up a little cup tasting of the top 10 coffees from the Cup of Excellence that year. I remember cupping the coffees blind and pointed out my favourite. It turned out it was not the 1st place but the 2nd place winner that was my favourite and that was the coffee from the Caballero family. Don Fabio Caballero who was present at the event blushed and got quite embarrassed as the person standing next to him was the 1st place winner and he seemed quite upset that I did not pick his coffee as being the best one.

In the following year I was fortunate to be invited as a jury taster at the 2005 Honduras Cup of Excellence, despite that I was just a barista back then and did not buy green coffee or own a roasting business. I spent a full week in Honduras cupping through some amazing coffees in the competition. I can still remember a coffee that was named “the purple princess” by my industry friend and legendary coffee person Peter Giuliano. It was a coffee that really stood out from the rest and it turned out to be a coffee from Marysabel and Moises. They won 2nd place in the competition that year too, but since I was not a coffee buyer back then, all I can remember is that I met the Caballero family briefly during my week in Honduras.

It was not until 2010 when I was able to properly meet and visit Marysabel and Moises for the first time. I was back as a jury member for the 2010 Honduras Cup of Excellence which was taking place in Marcala, the hometown of Marysabel. The Caballeros are very warm and outgoing people so they quickly approached me and asked me if I remembered tasting their coffee in Trieste back in 2004. We had a big laugh about the story and agreed that they would show me around their farms and wet mills after I finished my duties as a juror. I was quite impressed with their whole operation and also really liked their coffees. Despite them being more or less sold out of coffee for that harvest they managed to sell me 15 bags of some of their best coffee. Since then I have visited them every year and we have become very close friends. I feel fortunate to being able to work with such bright and warm people and have learned a lot from the many trials and experiments we have done together over the years.

When you are 3rd generation and multiple award winning coffee farmers it is easy to believe that there is no point trying to change the way you do things. After all, why change a winning recipe? Well the secret behind Moises and Marysabel’s success is the fact that they are willing to change, take risks and develop. Every year since my first visit to their farms, we have been looking at how they produce coffee and discussed how they can improve it to elevate the quality even further. Moises, just like myself, loves to experiment and discuss new ideas. Over the years we have tried many of those ideas. While some things have been easy to change, others have been more challenging. Sometimes we have failed and other times we have seen immediate improvements. It is the many small details and changes that Marysabel and Moises have been implementing , some of them that we have been part of, that gradually have made their coffees even more consistent and delicious over the years.

One of the greatest examples of our cooperation has been the big drying experiment we conducted in 2012. After having bought coffee from Honduras for a couple of years, I had noticed that some of the coffees would taste fresh and fruity upon arrival to Norway while other lots would taste faded and in worst case woody and stale. Even when shipped in the same container and stored in the same warehouse I would  taste variations in coffee freshness between lots. After further investigation it was not consistent with the harvest date either and despite the popular belief that “Honduran coffees tend to fade fast” I knew that human made political boarders had nothing to do with coffee freshness. It had to have something to  do with how the coffees were produced.

I had been reading about drying temperatures and times and how it could influence coffee freshness and flavour.  It made me interested in testing out different drying methods on the same batch of coffee to see if we could improve the coffee quality and extend it’s shelf life. I sent a photo to Moises of some drying beds that were covered in shade nets that I had seen in Brazil , and asked him if he could build something similar. But Moises is a creative man so not only did he build raised beds with shade nets, he also built raised beds inside a plastic drying tent and a few more that were placed in the sun without cover.

He suggested that we could dry the same batch of coffee with these three raised bed methods in addition to drying on a concrete patio and in a mechanical dryer. That way we would have 5 methods to compare and see which one yielded the best results in the cup.

The experiment was conducted in March 2012 but the immediate taste evaluation did not show any huge differences in quality. It was not until August the same year that we started to taste that the samples dried mechanically and on the patio was starting to taste a bit faded. In the end we found that by drying the coffee slowly under shade on raised beds we could make the coffee taste fresh and nice for over a year. It meant we could preserve the quality and the value of the coffee for a much longer time.

There was only one problem. The climate at the wet mill is cold and wet during the months of the harvest and drying would be too slow under shade. It could encourage mould to form on the coffee which would affect the flavour negatively in a big way. Moises solved this challenge by moving his drying beds to his back yard in Marcala where the climate is normally tempered and dry during the harvest.

All the coffees we buy from the Caballeros are now dried in this way. In fact because of this experiment we have implemented similar drying techniques with all the farmers we work with directly and it is a huge part of why our coffees taste fresh for a long time after harvest.

Improving the processing, drying and milling are not the only things Moises and Marysabel are woking on. They have been pushing hard for many years to get seeds from rare coffee cultivars. Since I started buying coffee from them they have established a decent production of Geisha, Java, SL28, Batian, Pacamara and Ethiopian cultivars. All have their unique flavour profile. We are fortunate to be able to buy some of these cultivars and offer them to our guests and customers. I know there is more to come in the future years too. The Caballeros are testing out around 50 different cultivars at the moment and together with their clients they will be selecting the best performing ones and plant more in the coming years. But as Moises likes to put it: “I still want to drink Catuaí every day” so I believe there is no immediate risk that we will run out of their sweet and chocolaty Catuaí coffee.

Taking care of the
community

As you might understand, I could write a book about all the things the Caballeros have improved on their farms over the years. I still believe that the most fantastic work that Marysabel and Moises are doing is the work that is not communicated a lot. During the harvest season which is normally between January and March, Moises and Marysabel employs a lot of local workers who live in the mountains close to their farms. Not only to pick the coffee but also to work at the wet mill where the coffee gets processed, washed, dried and bagged.

Recently the Caballeros are also doing the dry-milling of their coffees. It means Moises and Marysabel are in complete control of their coffees from when they are picked in the farm until they get sorted, vacuum packed and boxed, ready for export to Norway. This ensures that the quality is always top notch and it also means that Marysabel and  Moises are generating a lot of work in the local community.

But the work does not stop when the harvest is over. They constantly have to make sure their farms are productive. Fertilisers needs to be applied and their farms are renewed by re-planting, stumping or pruning the trees. Years ago they stopped using herbicides and started with manual weed control both because it is better for their soil but also because it ensures that a lot of their workers have a job throughout the whole year.

It is no secret that both Marysabel and Moises are loved in the coffee community but they are also loved by their neighbours, employees and their whole community. Maybe that is part of why their coffees are so delicious? At least for me it is a perfect example of how I measure coffee quality. It is not only the flavour in the cup that matters but knowing by whom and how coffee was produced also makes a difference.

Ripe cherries are hand picked by local pickers. The pickers are paid extra to sort ripe cherries from the unripe while they are picking. Sorting is done by simply putting the cherries in separate bags.

The coffees we buy from Marysabel and Moises are all dried slowly on raised beds covered with shade nets. These beds are set up by their house in Marcala where the climate is drier than at the wet mill which is located higher up in the mountains. During drying the coffees are raked throughout the day to ensure even drying.  At night it gets  covered to prevent condensation and the risk of the coffee gaining moisture in the drying process. Once the coffees are dried, they are stored in air tight grain pro bags before the they get milled and packed in vacuum packs and shipped to Norway.