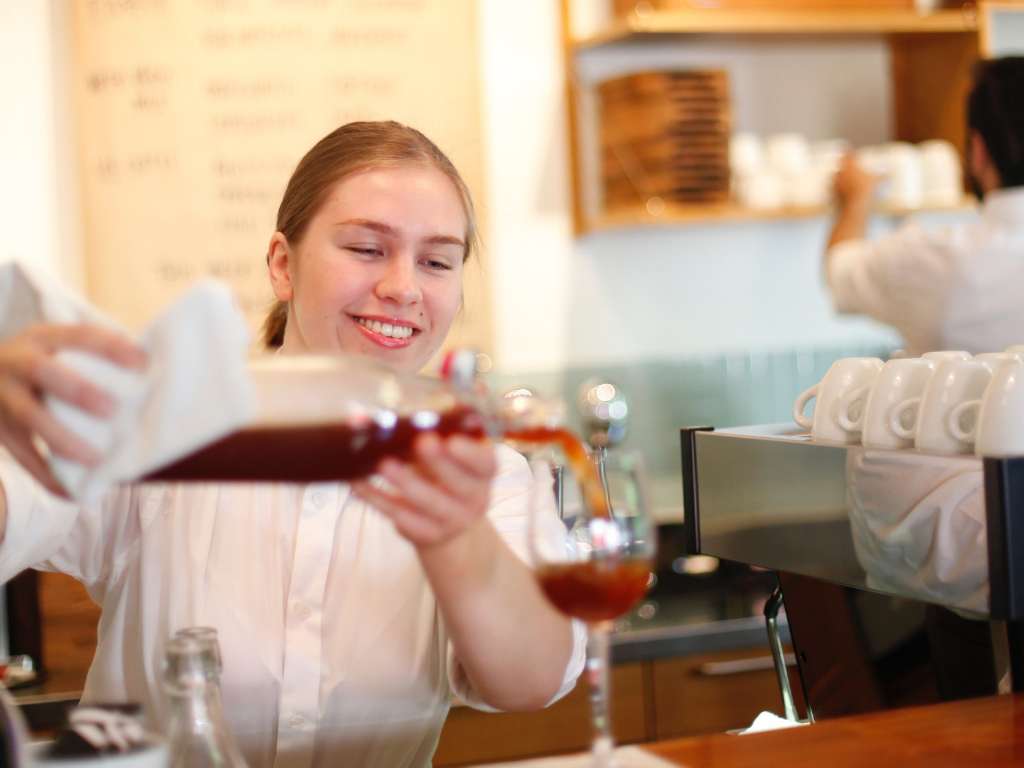 Last year, we started a new internal project amongst the team here which we called “The Instagram Takeover”. The purpose of this project was to showcase the many faces here that make Tim Wendelboe (the company) what it is. This week, we are focusing on Eira Witsø, one of our baristas behind the bar and packing assistant at the roastery. She also happens to be my friend’s daughter. We’re calling her “The Polygot” because she speaks multiple languages. Throughout the day, we will show you a little bit about who she is and what her typical day/week at work is like. As always, I have promised not to do any editing on these stories to allow their personalitites to shine through. My aim is really to just let you get to know us a little better, and emphasize that any great success is really a team effort. So here we go. Here’s 25 Questions with Eira…

3. Where do you come from?
I’m born in Oslo, but moved to a small countryside village an hour away from Oslo when I was 11.

4. What did you study / where did you work before coming here?
I’ve studied 1 year of sociology at the University of Oslo, and have had some various café jobs before I joined Team Wendelboe.

5. Do you remember what your first meeting / interview with Tim was like?
My first memory of Tim is him coming to our house once many years ago, as he and my step dad, who also works with coffee, are friends. They were going to roast some green coffee in our wood fired oven. Back then I thought that they were a couple of weird geeks. Now I’m really sad I wasn’t into coffee at the time, and wish I would have tried the end result.

6. What is the best thing you love about the job?
We have so many lovely customers, and I really enjoy talking both to our regulars, and people traveling from all over the world. Also, everyone who works here are so proud to be a part of this team, and I’m inspired by them everyday.

7. What is the most challenging?
To always remember small details, and to keep a cool head and stay focused when the bar is at its busiest. But that’s also part of what makes this job so much fun.

8. How would you describe Tim Wendelboe (the company) in one word?
Thorough.

9. How would you describe Tim Wendelboe (the person) in one word?
Hard working.

10. What is your favourite type of coffee to drink?
Kenyan filter coffee or cappuccinos.

11. What is your next favourite beverage to drink?
More coffee.

12. Coffee is best with…?
I like having my coffee by itself. If I’ve ordered pastries alongside the coffee, I usually wait until after I’m done with the coffee to eat it.

13. What is the funniest / most embarrassing moment you’ve had at work?
This one time I thought a young couple were speaking French, and so I started talking to them in French, and it turned out they were from Trondheim… (The dialect they speak there does not sound like French AT ALL). I really did think they spoke French, and was just very excited to practice some French, but just ended up looking like a snobby douchebag who wanted to show off.

14. What has been the most rewarding experience you’ve had at work?
Meeting coffee enthusiasts from all over the world who have come to Oslo to visit the espresso bar.

15. What do you do in your spare time, when you’re not working at Tim Wendelboe? Any special interests, hobbies, skills?
You’ll often find me in the bar on my days off as well, having my colleagues make me coffee while I’m chilling out with a book. Other than that I love going to flea markets and 2nd hand stores, and I also love languages. I speak English and French, and I’m currently learning Spanish and Portuguese.

16. If you weren’t working at Tim Wendelboe, what other career would you want to have?
I’d love to have a job that works towards building an even more inclusive society, and that fights against any kind of discrimination of marginalized groups.

17. What was your first ever impression of coffee?
I thought it tasted disgusting, haha.

18. What does an average day look like for you at Tim Wendelboe?
There’s a lot of different things going on behind the scenes, so that varies quite a bit. However, a lot of coffee making and washing/cleaning is usually involved. And tasting and calibrating coffee.

19. What does coffee mean to you?
Ugh, I’m going to sound like a cliché now, but when I’m making coffee, I know I’m part of a huge process that have involved a lot of people’s hard work, and that makes me feel like I’m a part of something big.

20. If you could travel to any one of our origin countries, which one would you pick?
Colombia. Without a shadow of doubt. I want to go to Colombia so, so badly.

22. Fruity or Chocolaty?
Fruity for sure.

23. Do you have any guilty pleasures when it comes to drinking coffee outside of Tim Wendelboe, or are you a diehard Tim Wendelboe coffee drinker only?
I try to drink at other coffee shops as often as possible. I think it’s important for me to see what’s out there and to try different coffees.

15. If you could have coffee with anyone in the world, who would it be and why?
I’d love to meet Harriet Martineau, who was a sociologist in the early 19th century. She’s (obviously) not alive anymore, though. She traveled around the US to study the suffragette and the abolition movement, and it would be so interesting to hear about that from someone who was actually there.

That’s it’s and that’s all for now! We hope you enjoyed getting to know a little bit more about Eira. If you wish to get to know more of the people behind the scenes here at Tim Wendelboe, stay tuned by following us on Instagram (@timwendelboe) and Facebook. We will notify you when the next team story is ready for you to enjoy with your cup of coffee…